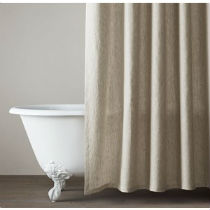 Shower curtains get dirty. You may think that your shower curtains would be the cleanest thing in your house, but soap scum and damp conditions builds up, making them a dirty disaster.

Because showers are damp and warm, it’s the perfect environment for mould and mildew to grow. Although this does not necessarily mean a ‘dirty’ shower, they do not help in creating a clean looking shower. Your shower curtain will appear dirtier as the mould and mildew builds. However, soap scum is the true indicator of a dirty shower

Put your shower curtains into the washing machine along with bath towels on a low setting and add one cup of baking soda. Wash in one cycle with warm water. To make sure the fabric doesn’t get damaged while being washed, add half a cup of vinegar during the rinse cycle. Let your curtains dry while dripping. Do not put them in the dryer!

Vinegar can be used to clean soap scum off your shower curtains. Place the shower curtains and a few bath towels in the washing machine. Add normal detergent with some vinegar in it. Wash using a gentle cycle and hang your curtains back on the rods to dry.